Ken’s maternal family, the Sternbergs, trace their lineage to the town of Herborn, Germany. Ken’s maternal grandmother, Emma Rosenthal, was daughter of Josefina and Samuel Rosenthal. Josefina was born Josefina Ackerman, daughter of Wolf Ackerman and Gretchen Levi. Curiously enough, both Josefina and her sister Johanna would take the surname Rosenthal in marriage. 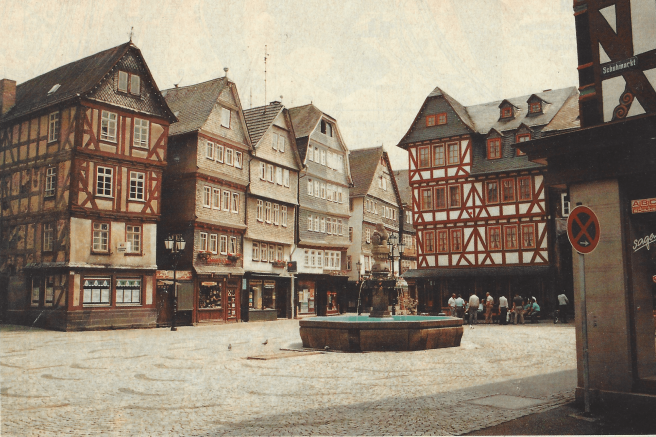 Herborn is a town in central Germany’s state of Hesse. The Rosenthal family owned a cattle farm outside of town, and traded in livestock, as well as operating a butcher shop within town. Samuel and Josefina’s daughter, Emma Rosenthal, would marry Heinrich Sternberg in Herborn.

Emma and Heinrich would have three children: Leo, Bernard, and Betty.

Click here for a brief history of the Jewish community in Herborn.

As the Nazis rose to power in Germany, it became clear to Jewish families across the country that emigration would be soon necessary. In 1937 the Sternberg family began their journey to the United States. Bernard would first expatriate to Amsterdam, before following his family to America. Their home in Herborn would be taken by a Nazi family.

The family lived in the West End, where Leo and Bernard would become quite successful in the handbag business. Betty would meet Irving Schoen, and they would be married before 1941 (as indicated by Betty’s naturalization papers in which her surname is “Schoen”). Betty and Irving would lose their first child in childbirth, but would go on to have two children: Carol Eva (Hanna) and Ken (Yekutiel).

Leo would marry Lillie Sichel and have two daughters: Patsy and Ann. Bernard would marry Betti Fuchs and have a daughter, Rosalie. The family home in Herborn still stands, although the “Familie Sternberg” sign has been painted over.

Books on the Shoah