I have lived for many years now in a small farming village in Western Massachusetts.We are one of about 10 Jewish families surrounded by a predominantly Polish and Yankee population. I have repeated my family’s story.

The central square of Herborn, the Marktplatz, had been anchored in my consciousness since memory began. A painting of the square hung in my parents’ home, an iconic representation of a disappeared world. It always seemed so tranquil and quaint in a way that resembled nothing I knew in Forest Hills, Queens. It was a far off mystery dream location. 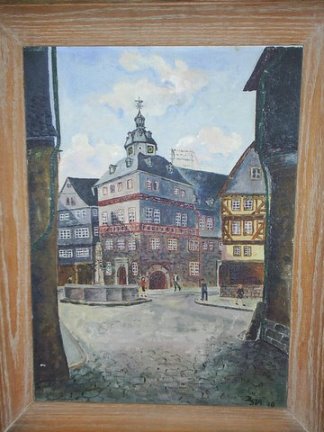 My mother would never ever go back to this town of her birth. The painting captured a memory of happy youth in Germany, but the actual town represented the horrors of upheaval.

My son Seth has made four trips to Germany. He visited my mother’s home town and cleaned the gravestones, including that of my great grandfather Nathan Sternberg. Seth has been trying to convince me for many years to return to Germany to visit my mother and father’s home towns.

I had not planned to revisit my grandparents’ Heimat. For me, Germany represented a burial ground, a country that had decimated European Jewry, and I did not want to wander on its soil again. In 1965, as a naïve and idealistic seventeen year-old, I had traveled to Germany to study German at the Goethe Institute. Seeing people old enough to have fought in the War filled me with turmoil. I did not want to be immersed in such pain again. 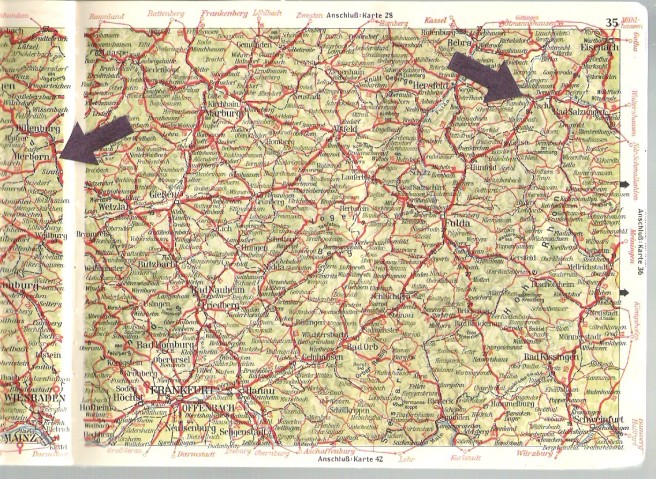 With my son’s encouragement and support (although he was unaware of that), I steeled myself to conquer my inner landscape, letting go of the turmoil and rage. Seth and I bought air tickets to Frankfurt and a Eurail pass for three weeks in Germany. Hopefully, “everything (would become) illuminated.” 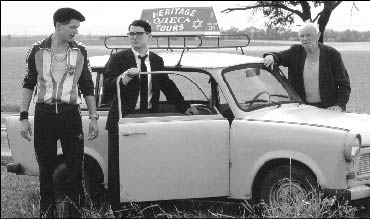 But, there was also a personal story that needed resolution. A family secret had haunted me and needed to be laid to rest at the cemetery in Vacha. I would be going as an “emotional tourist” visiting the site of a family tragedy, fulfilling a promise, and doing the work of teshuvah for my family.

The first part of the pilgrimage was to Herborn, a bustling town about 45 minutes outside of Frankfurt where my mother Betti was raised. Her parents Emma and Heinrich Sternberg, cattle dealers, had been good friends with their neighbors the Meckels and my mother’s best friend was their daughter Johanna. 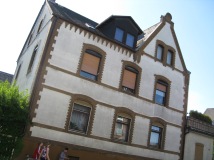 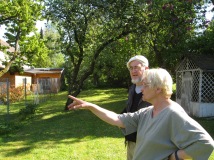 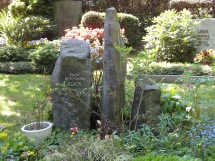 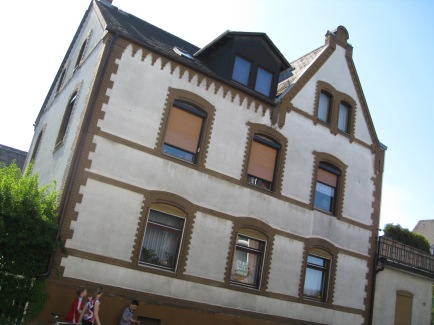 Their homes on the Austrasse shared a common garden which extended the length of the block and was behind the Sternberg stables and butcher shop. 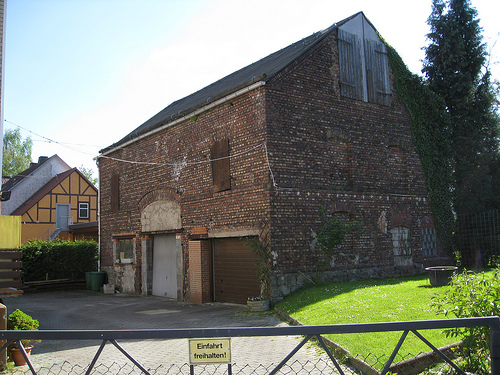 The photo below shows the shop attached to the home and a portrait of the family with friends. From the right rear is my great grandmother Josefina Rosenthal, her son-in-law Heinrich Sternberg, his wife, my grandmother Emma. In the front row are their children. From the right is Leo, Betti, my mother, and Bernhard.

My mother studied piano at the conservatory in Frankfurt and taught Johanna also. In 1935 at the encouragement of her brothers who had immigrated to the USA and had read Mein Kampf, she left her parents and Germany and came to the USA. In 1938, she and her brothers were able to bring her parents out of Germany to America. Growing up, I heard of the friendship of the two families—the Sternbergs and the Meckels. My mother was never emotionally able to return to her heimat but Johanna did visit my mother once.

What I learned on this trip from Johanna’s daughters was the extent of this friendship. During the 1930s the Meckels had hidden food in the backyard garden so that my grandparents could survive. Had this cache been discovered the Meckels would have been imprisoned by the Nazis. On this trip, I made sure to visit their graves and offer a prayer of thanks to them.

Johanna married Paul Schnittert, a lawyer. He tried to avoid the military but was eventually conscripted and sent to serve in Norway. When the War ended he was captured by the Americans and imprisoned. My grandparents wrote letters to the US authorities on his behalf stating that he was not a Nazi and about the help rendered by his family. He was released from the prison. After the War my family sent parcels and care packages of food and coffee and clothing to the Meckel family and it helped them to survive.

Seth has continued this family friendship of over 100 years into the next generation.

In Herborn the town archivist showed me sites where Jews had lived and the plaque where the synagogue once stood. They also discovered and restored a mikvah. It was the “extinct people tour.” This is a town with no Jews. They fled to foreign lands or vanished on transports to their deaths.

A description of a Mikvah, in Vacha

Seth and I walked to the Jewish cemetery and cleaned the moss off the stones and said prayers. The cemetery was well maintained and had not been damaged during the Nazi period because it bordered on a Psychiatric Hospital and a Christian cemetery. 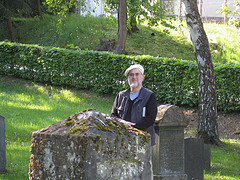 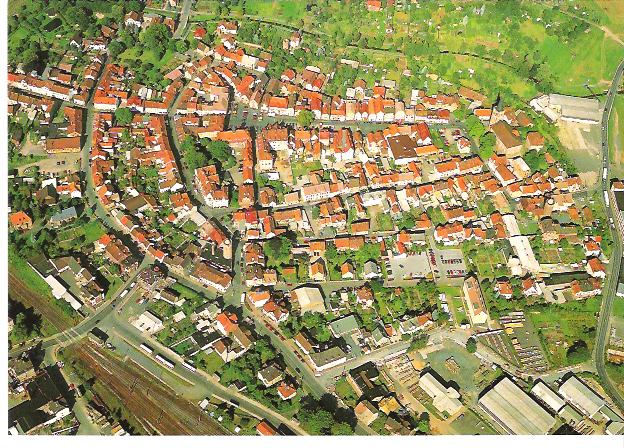 Vacha had been a border town in East Germany and thus no one from my immediate family had visited. It is a beautiful village that time has forgotten. I felt as if I was back in the 1920s and admire the strength of my grandparents—maintaining their Orthodox Jewish life in this little German village. Kaufmann and Therese Schon were part of a community of 20 Jewish families. They lived on Steinwegstrasse (1915 views on right). 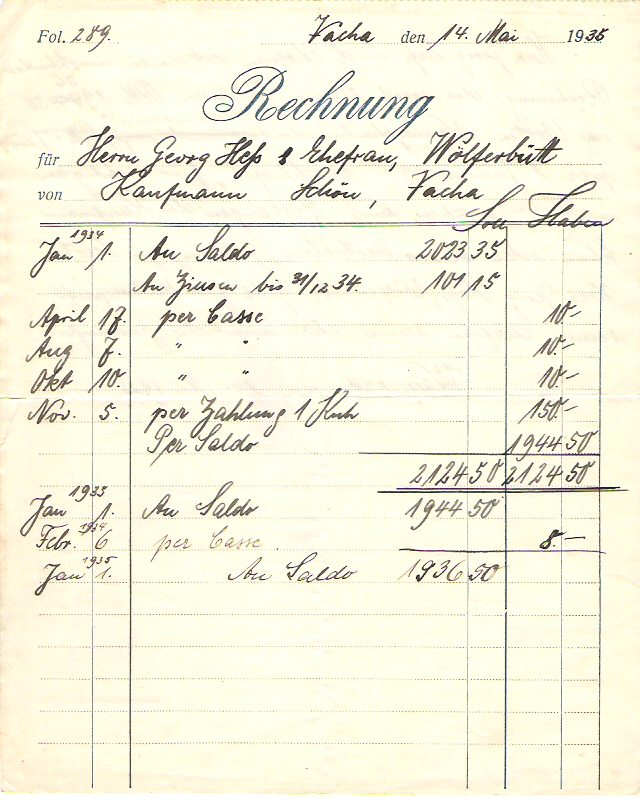 They The Schons were cattle dealers like my other grandparents, as the bill of sale on the left proves. Herr Georg Hess and his wife from Wolferbutt are paying off the cost of a cow purchased on Nov. 5, 1934. It seems that Kaufmann Schon was also a shochet as the document on the right from the provincial Rabbi Dr. M. Cahn from Fulda reveals. 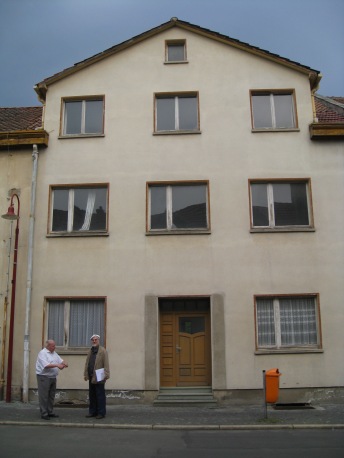 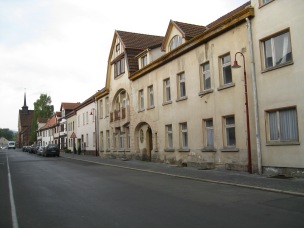 My grandparent’s home had been taken over and combined with the small hospital next door during the 1940s or so. With the reunification of Germany in 1989, the hospital was closed. The home like, many in Vacha, was abandoned and I could only peer through the windows. I fantasized about moving back into my grandparents’ home and the return of Jewish life somehow to this little village.

Just as in Herborn, I went on tour of the town and was shown where the Jews used to live and the synagogue used to stand and curiously a restored mikvah. It was haunting and I felt like an American Indian visiting former grounds where ancestors had worshipped. There were no more Jews in this village. Only signs and memorials and a room in the local museum.

A mural within Vacha’s Town Hall. Much of it depicted Vacha through the ages. The 20th century was skirted over. 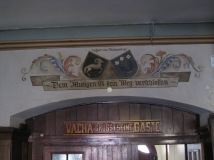 The Town Hall of Vacha

A testament to Vacha’s former industry

The backstreets of Vacha, now quiet 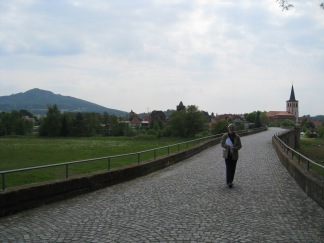 Vacha straddles the border of East and West

Since at least the 18th Century the Schons lived in nearby Volkershausen. Kaufmann’s father was Isaak and his mother was Hanna. They had five children pictured here: Rosalie, Kaufmann (far right), Veilchen (front center), Louis, and Ida. Kaufmann was the one to move to Vacha in the early 1900’s.

My father Isaak left to come to America in 1927 as a very young man seeking the golden dream of fortune. He lost that fortune in 1929 in the stock market collapse but continued to work as a coffee salesman. New York City is dotted with many restaurants and delis who were his customers, and these contacts would become important very soon. He rescued 69 individuals during the 1930s and many of them found work in these modest eateries. He rescued his whole family except his sister Selma. Selma was suffering from some serious mental illness. The family knew she would not be admitted into the US as a refugee because of immigration restrictions. 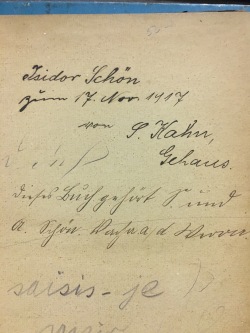 My father’s schoolbooks; the left inscribed by his fellow classmates, and the right by his schoolteacher, Hugo Baumgart.

My grandparents Kaufmann and Therese did not want to leave her behind when they finally left Germany in February 1939. At the time she was in a mental hospital in Hildburgshausen some hours away from Vacha. My grandparents negotiated with the mayor of Vacha for her care in perpetuity. The family home was left to the town of Vacha with the understanding she would be cared for and when the time came, buried in the Jewish cemetery. What happened next, I am sure you are all aware of… She was murdered by the doctors at the hospital as part of the euthanasia program. The promise was betrayed.

Growing up in the German Jewish shtetl of Forest Hills, Queens, I had never known about Selma and only learned of her short life after my father died in 1981 and I received a large handwritten family tree. Her name appeared next to my father’s. For some time no one would answer my questions about this mysterious aunt. Finally, I was told her story as I have just told you. Here was a tragedy that had been buried and there was a family shame that was hidden.

I was resolved to transform the family secret and shame into an acceptable reconciliation a belated Jewish burial of sorts. I have been saying kaddish for her for many years and in 1986 I gave her name to my daughter. But, Selma needed a place in the family cemetery. 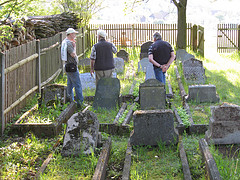 Seth and I drove up to the cemetery on a hill overlooking Vacha—a very bucolic tranquil spot. The cemetery had been repaired some years ago through the financial contribution of a distant cousin Louis Schoen. In order not to invite renewed vandalism, it was decided to leave the stones leaning on their bases rather than put them upright again. A few local residents, Inge Wimmer, an historian, Gunter Hermes, the head of the Vacha Museum, and Olaf Ditzel, a book dealer, had been involved in doing research on the Jews of Vacha and repairing the cemetery. They also were very helpful to us during our stay in Vacha.

In the cemetery I located the grave of Kaufmann’s twin sister Veilchen. It was broken in half. Next to the gravestone I placed a small smooth round stone with the name Selma Schon written on it and her date of birth. Her stone would be next to her aunt Veilchen.

On behalf of my entire family, I spoke out loud to Selma, pleading for her forgiveness for having left her behind, and on top of that, for having buried her memory. I told her she was not forgotten. Both Seth and I were sobbing. Seventy years after her murder, I said some prayers for her… that the Master of Mercy shelter her and that her soul be bound up in the bond of Life and that she repose in peace.

I felt a heavy weight leave me. I had also found some peace.

Together with Seth I had spied out the land and the people that had terrified my family and I was no longer afraid. I found myself at ease. Two generations had passed and the profaned land is transforming itself. The newest generation has a full awareness of the crimes of the grandparents.

It is this generation that Seth is making friends with. Together, I hope they will work to make this world a better place.

This journey was inspired by the work of the Jewish Historical Society of Western Massachusetts and was made possible through the generosity of The Harold Grinspoon Foundation Incentive Grant.

My thanks to my wife Jane Trigere for her encouragement and design help.

View all posts by schoenbooksblog