Ken’s paternal family, the Schoens, once hailed from Vacha, Germany. Ken’s great-grandfather Yekutiel raised his family in Völkershausen – a village just south of Vacha. Together with his wife Hanna (maiden name Nelkenstock), Yekutiel had six children: Jütte – who is believed to have died in childbirth, Rosalie, Frieda, Kaufmann, Louis, and Ida. 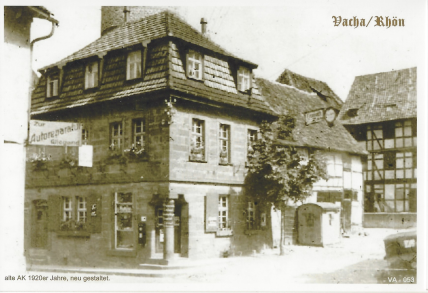 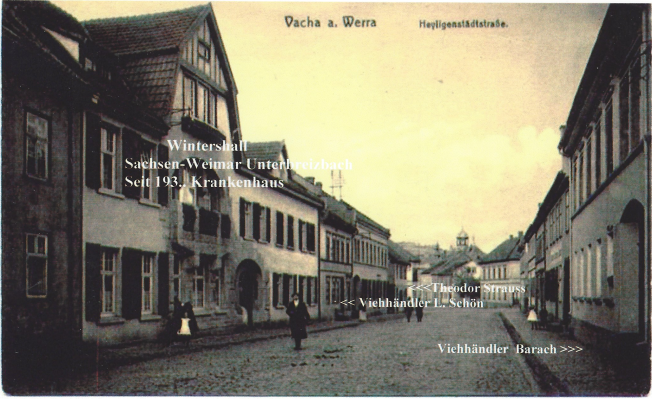 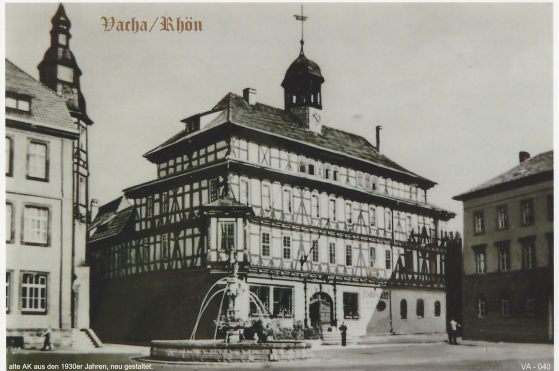 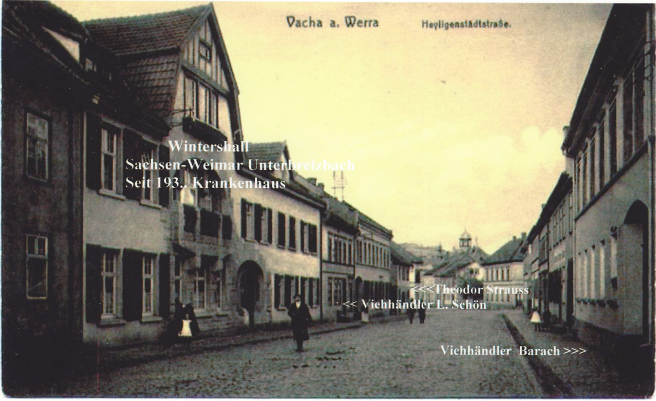 Kaufmann’s eldest, Sophie Schoen, would marry Julius Katzenstein, and together they would have two children, Jerry and Rena.

Ken’s father, Isaak, worked in Leipzig for a number of textile, cloth, and leather manufacturers throughout the 1920s. In 1925, he would begin efforts to emigrate to the United States. In order to emigrate, Isaak was required to provide work documents from his jobs in Germany, as well as references from past employers. In 1927, Isaak’s emigration request would be approved and he would arrive in New York by the end of the year. He began work in the New York coffee business. He took the name Irving at this time. Throughout the 1930s, the Nazi’s rise in Germany was increasingly felt–even in small towns like Vacha. While Irving had made his way to America in 1927, the rest of the Schoen family remained in Vacha and the surrounding area (the state of Thuringia) as well as Leipzig. As chronicled in Günter Hermes‘ “Timetable for the History of Vacha”, anti-Semitism came to Vacha as early as 1935:

A large culture and work conference of the circle Eisenach-SOUTH of the NSDAP is held in Vacha, connected with the exhibition “Thuringian Race”, which is constructed from 15 to 28 February in the secondary school. More than 1000 political leaders, bureaucrats and authorities march through Vacha; all halls are available for events. The general exhibition is held in the school auditorium. The visit of this exhibition and the associated events is made compulsory for all party members and members of the subdivisions such as: SA, SS, NSKK, HJ, BdM, Frauenschaft, DAF, NSKOV, NSV, NSLB, NSBA. 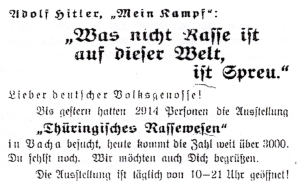 “Adolf Hitler, ‘Mein Kampf’: ‘What is not [of the Aryan] race in this world, is chaff.’
Dear German people!
As of yesterday, 2914 people had visited the exhibition ‘Thuringian Race’ in Vacha, today the number comes well over 3000. You are still watching. We welcome you. The exhibition is open daily from 10-21.”

A year later, this bigotry is openly expressed in the local newspaper: 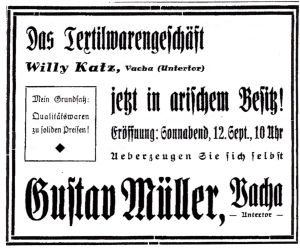 Another article in July 1938, noting the decline of the Jewish community in the town:

Jewish property in Vacha has declined sharply, and in 1933 the local Jews owned no less than 22 built-up plots, including the old castle, the synagogue and ten commercial buildings. To date, the following have returned to Aryan ownership: the old Wendelstein castle, 7 commercial buildings, 3 residential buildings and 1 warehouse, altogether 12.

In Jewish hands are still 9 houses and the synagogue; at 2 houses sale negotiations are hovering. Today there is only one Jewish business left.”

On the night of October 9, 1938, the Synagogue on School Street is desecrated by unknown vandals. The investigation leads nowhere, and restoration of the synagogue is declined by the town. Ownership of the building’s remains is contested between Vacha and the Jewish community of a neighboring town.

“At 9 o’clock in the evening on 9 November 1938, the local population attacked the Jews, only the merchant Hermann Strauss, Steinweg, had their front door pressed in and their house forced in. The man was beaten and kept from getting up off the ground. Frau Strauss kept hidden and thus could not be found.

At the livestock merchant Kaufmann Schoen’s, only 2 shutters and windows were destroyed. The destruction is only a light one.

Weapons could not be found on any Jew. 4,800 RM were secured from the Jew Hermann Strauss.

In addition to increasing violence at the hands of their own neighbors, by 1938 the Jewish people of Germany were required to register themselves as Jewish citizens with the local governor; while targeted fines and required identification became increasingly common.

The above “Jewish Donation Tax” became a regular injustice upon Jewish Germans beginning in November 1938, as the government levied a one-billion-mark fine against the Jewish people. The final paragraph of the citation reads: “If payment is not made on time, payment of a deposit of two percent of the amount due will be made. After expiry of the payment date, any amounts due will be collected without prior reminder and, if necessary, seized. The foreclosed funds are charged to the debtor.” 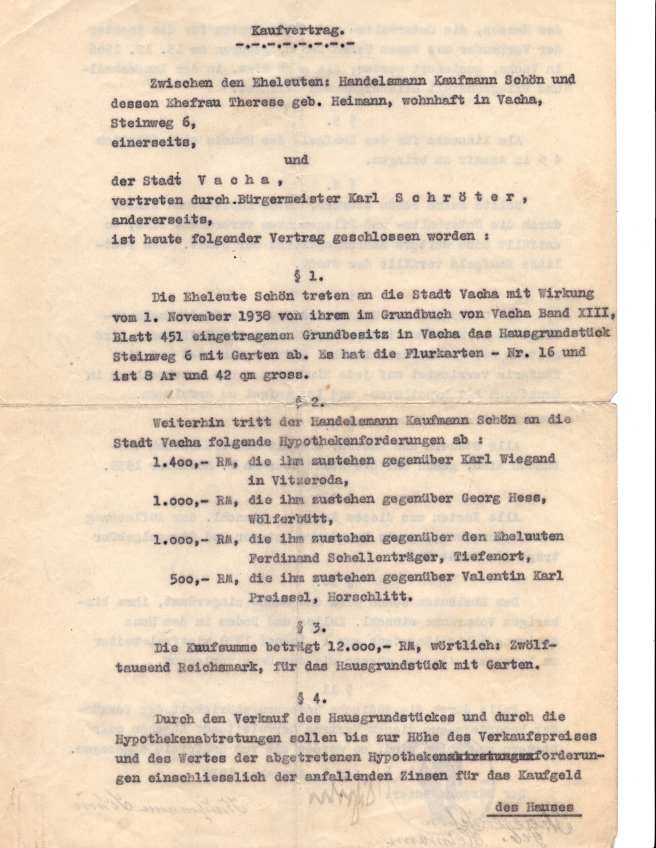 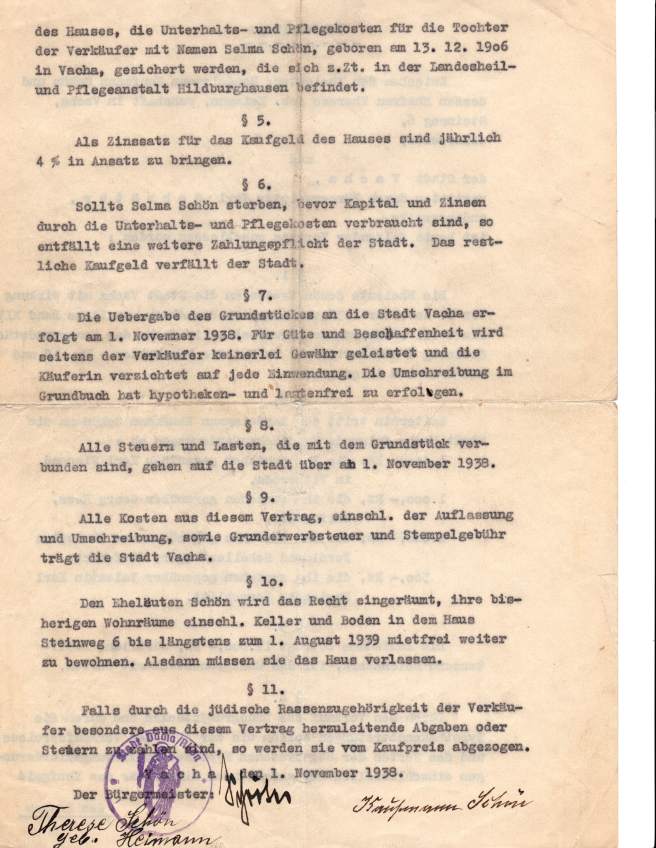 Above is a contract of sale between Kaufmann/Therese Schoen and the city of Vacha. The Schoen family sold much of their land and estates to the city as regulations about Jewish ownership became increasingly oppressive. Perhaps most sickening of all is the final, 11th clause: “If, due to the seller belonging to the Jewish race, dues or surcharges deriving from this contract are payable and required, they shall be deducted from the purchase price.”

The family was forced to sell their land back to the city of Vacha in November 1938. As the Nazis continued their persecution, the family saw the need to emigrate. Through Irving’s efforts nearly all of them would escape and survive the Shoah by emigrating to the U.S. In 1938-39, Irving sponsored 69 individuals who emigrated to the United States. Irving was required to obtain affidavits of support for each and every family member or friend whose emigration he wished to sponsor: 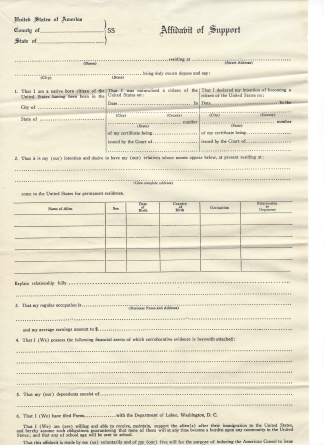 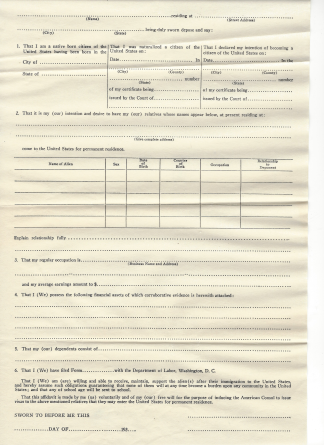 Irving, now living in Long Island, received numerous letters from cousins, friends, and neighbors throughout 1938 requesting his help in their emigration from Germany: For a record of all known Jews of Vacha that were taken by the Shoah, please click here.

Below is an emigration questionnaire submitted by Kaufmann and Therese upon their emigration from Germany in 1939. In addition to questions regarding their religion and ethnic background, the questionnaire required all of their assets to be documented, accounted for, and partitioned for various fees of the regime. At the end, Kaufmann writes, “If, after submission to the Gold Discount Bank, I have another amount remaining, I will make it available to my needing family members for their exemption.”

Selma Schoen, Ken’s aunt, was killed by the Nazi T4 program as a “life unworthy of life.” She was hospitalized for an emotional illness that today no longer needs hospitalization.

Her exact death date is not known but it is thought that she was in her late thirties. In fact nothing specific is known about her after the last of her family left Germany in March 1939.

Her brother Irving (Isaak) emigrated early to the United States in 1927 and managed to find ways in 1938-39 to sponsor 69 individuals and bring them out of Nazi Germany. Irving’s older sister Sophie and her family, his brothers Alfred and Eliezer, his parents Kaufmann (Yekutiel) and Theresa are his closest relatives for whom he signed affidavits of support. But Irving was unable to bring Selma out.

The immigration laws of the United States were very strict about not allowing people with illnesses into the country. Knowing this, the family made financial arrangements with the mayor of Vacha to support Selma in the hospital indefinitely. What we know about Selma’s end can only be surmised by reading history books and accounts of the euthanasia programs the Nazis devised to rid their country of the “weak and powerless.”

Ken discovered his aunt Selma’s existence only after his parents had died. A family tree (stammbaum) revealed her named and surprised the younger family members. Who was Selma? No one wanted to talk; the sorrow or the shame may have been too great. More recently, her two surviving brothers shared their painful memories.

In 1986, Ken decided to honor Selma by naming his daughter after her. Today, Rebecca Selma Schoen is a living memorial to her great aunt. Although very little is known about Selma Schoen of Vacha, Germany, she is respectfully remembered. During his trip to Vacha in 2008, Ken and his son honored Selma in the Jewish cemetery in town. 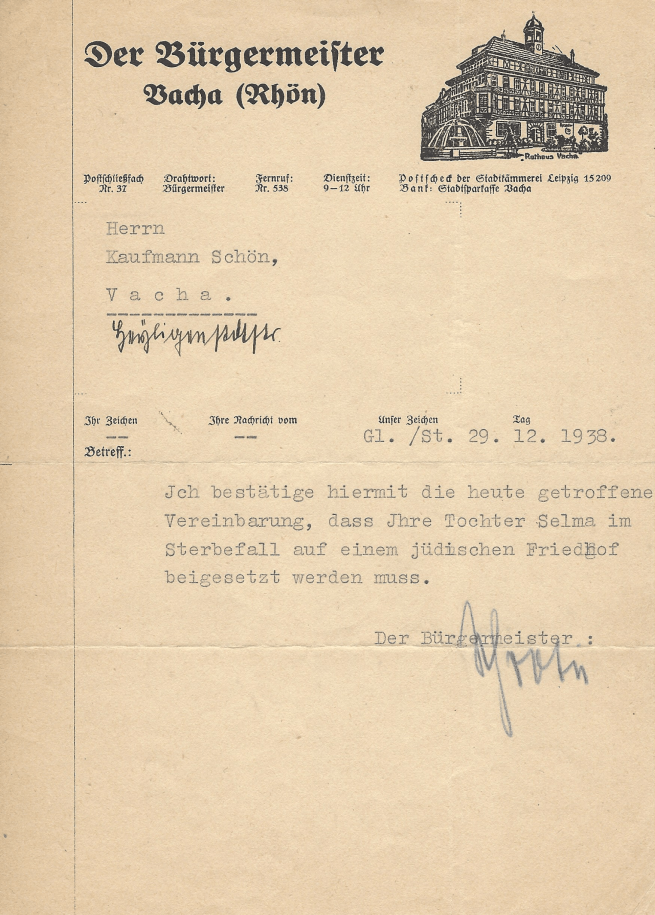 A chilling letter written by the mayor of Vacha in 1938, addressed to the Schoen family as they prepared to leave the country: “I hereby confirm the agreement reached today that your daughter Selma must be buried in a Jewish cemetery in case of death.” Selma was never given a burial, nor was her death memorialized until Ken’s 2008 journey to Vacha.

Irving would marry Betty Sternberg in the US circa 1938. He started the Enterprise Coffee Company circa 1940. The company would be shut down during the Second World War due to the US coffee quota established in 1942. The company would resume business around 1947. After losing their first child in childbirth, Irving and Betty would have two children together: Carol Eva (Hanna) and Ken (Yekutiel).

Ken’s cousin, Jerry Katzenstein, would marry Frieda Rosenstoch in the U.S. The extended Schoen family would live primarily in New York City and the surrounding area.

Books on the Shoah